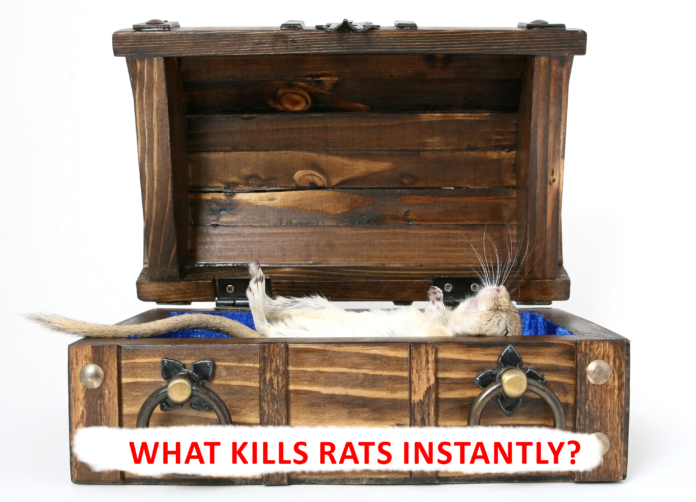 Everyone is susceptible to it. When you notice just one sign of it, businesses and homes can go from comfortable to cringe-worthy. Why would something so small cause so much damage? Rats.

The small, furry, four-legged creatures can wreak havoc on any building and its inhabitants. Aside from causing damage to your property, rats also pose health hazards to humans and domestic animals due to the diseases they carry. If you’ve ever seen a rat, you probably want to know what kills rats instantly.

There is cause for concern when you see even one rat in your house because there will be many more where there is one. And what’s worse, rats are usually accompanied by mice. As a homeowner or business owner, you probably want to know how to kill rats instantly to get rid of them for good.

Knowing some facts about your furry little nemesis is helpful, like that there are over 60 rat species in the world.

Roof and Norway rats are the most common rats associated with home and business infestations. There may be many species of rats, but they all like the same things, such as food and clutter.

We will review all the standard methods for getting rid of these invaders, including natural remedies and traps. Some helpful facts will be revealed, like why poison isn’t the best option. Here’s how you can get rid of these pests and reclaim your home or business!

The Rat Poison: Not a good idea

The setting out of rat bait is highly effective because the rodents ingest the poison when they nibble on the block. Rat poison is not the best option, including safety concerns.

Rat poison can harm both people and pets.

Poison rat baits are effective, but they can also be dangerous to humans and other animals. They can be picked up by children and eaten. The EPA reports receiving more than 15,000 calls regarding children ingesting rodent poisons in 2012. Most of the children affected were under six years of age, and some suffered adverse health effects.

Additionally, when using poisoned bait blocks, children aren’t the only ones at risk. Rat poison can be harmful to family pets and help wildlife, including birds of prey.

The rats do not kill themselves in the open.

As the rat poisons do not take effect immediately, the corpses will not be found near your bait blocks. As a result, the rats crawl away and die in difficult-to-reach places.

Imagine dead rats decomposing in your walls! That corpse will smell horrific enough to make people sick, but it can also attract more pests, including other rats.

Pest Management Rat traps can be an effective pest management tool. Several types of traps are available, but it’s best to keep away from complicated traps that are difficult to set up. A trap can be challenging to choose, especially if you don’t know what to expect from each type.

Catch-and-release traps, also called live traps or humane traps, offer an alternative solution for those who do not want to kill rats instantly. You can see inside the web, knowing if you’ve caught one. They work with smaller rodents, including mice.

A live trap is a safe solution for everyone in your house. If the rats are caught and released, they may not live to see another day. The rats will likely die within 48 hours if you let them loose away from your home.

This type of battery-powered trap is easy to set up and delivers a lethal shock to rats without harming people or larger pets. Stepping on the metal plate causes an electric shock, instantly killing the rat. Check the batteries before you begin.

Snap traps are an old-fashioned, easy-to-set-up method of catching pests. Snap traps can also harm children and pets if they come across them and accidentally set them off.

The Sticky or Glue Traps

They consist of plain wooden boards that are covered in glue. Rats run across the boards and stick to them. Struggling only makes the trap more effective. Some consider this method inhumane, and you can’t re-use them as you can with other types. The web has also been known to catch larger rodents when they are entangled.

Bait stations use poison, but it is contained in protective boxes that children and friendly animals cannot access. The bait is reachable by rodents because they’re small and flexible enough to squeeze through the holes. Although it’s safer for children and pets, you might still have difficulty finding the corpses. Also, if you have a dog that eats a poisoned rat, the dog will become poisoned.

How to Get Rid of Rats Naturally?

This article aims to teach you how to kill rats instantly. Regardless of the method, you choose to eradicate a rat infestation, it would help if you accepted that it would take time. Taking this into account, some ways work faster than others. It is undoubtedly faster to have a pest control service take care of this problem, but there are also some fast-acting methods that you can try on your own.

Is there a smell that kills rats instantly?

It is simply a matter of mixing 2 to 2 and a half cups of ammonia with 100 to 200 mL of water and 2-3 spoonfuls of detergent in a bowl. After that, please it in areas where rats are likely to be found. The smell of ammonia instantly kills rats since it is very intense.

What effect does baking soda have on rats?

When rats and mice ingest baking soda (also known as sodium bicarbonate), they die. Because baking soda produces large quantities of gas when it hits their stomachs, this happens. Since mice can’t pass wind, they have no way to release gas and eventually die from the internal pressure.

To make this recipe, combine 1 cup flour or cornmeal with 1 cup sugar or powdered chocolate mix. Blend well and add 1 cup of baking soda. The rats will be attracted to the sugar or chocolate, and the baking soda will soon kill them once they’ve eaten it.