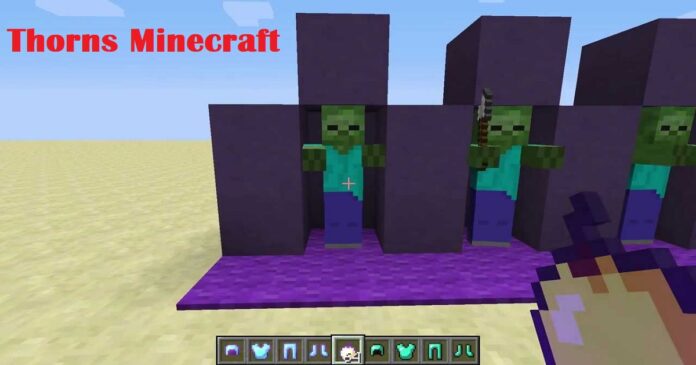 So what is a Thorn in Minecraft? It is an armour enchantment, usually in the shape of spikes, which a player can apply to the different parts of his body once he got higher levels in gameplay. It causes attackers (any player, creature or mob) to get damaged when they provide damage to the wearing player. These are kinds of spikes applied to any piece of the armor worn by the player. Thorn level III is actually the highest enchantment level of any item in the Minecraft game. It is important to note here that the enchantment will be getting more powerful as its level rises.

So, this article will cover in detail thorns, how to get them in gameplay, how they work, and which items can be attached with thorns in Minecraft.

Purpose of Thorns in Minecraft

In Minecraft, different armours and weapons can quickly help a player survive the battle. “Thorne” tool is also among them. Its primary purpose in the game is to give damage to the enemy when they attack the player in the battle. There are three throne levels in this game from Throne I to III. Similarly, when other players or mobs attack you in the condition you wore the thorn enchantment, there are chances that they will take damage back from those armor pieces. The attacker’s damage may be a physical attack or a knockback. For this tool to be working, it should be worn by the player during the attack.

The chances of damage can be calculated using the 15%xL formula, where L is the enchantment level. Meaning that, Thorne of level I gives damage to 15%, whereas Level III can give damage up to 45%.

Also, the damage created by the throne enhancements will go from hit points 1 to 4 (equal to half to two points). Also, each of the four possible points will have a 25% chance of occurring.

Also, suppose you are wearing more than one piece of armour enchanted with those thorns. In that case, the damage will stack additively with each piece adding a chance of dealing with damaging the attacker independently.

How To Get Thorns in Minecraft:

There are different ways a player can get Thorns in Minecraft. In the gameplay, a player can achieve Thorns level I and II from drops, fishing in rivers, by trading with different villagers, or looting from generated structures. Whereas, Throne III can be obtained by using the enchantment table.

How to get Thorns I and II?:

Now, the First power level of thorns may be unlocked by the use of the table. As an amateur player, this technique of having thorns is a bit of difficulty. However, a clear technique to get those levels are via means of locating in game naturally like fishing, looting drops, and buying and selling with a neighborhood villagers for the powerup.

Other than looting random resources, one can also obtain them by looting generated structures.

Getting Thorn III from enchantment book:

Thorn level III in Minecraft can’t be immediately received by using an enchantment table. It can be received with the use of an anvil that mixes thorn II enchantments to create thorn III. It also can be received from villagers buying and selling with them or locating an enchanted object with Thorn III carried out withinside the loot chest.

Another way of finding Thorn III is finding structures in the enchanted book.

Getting thorns from commands:

There is another way to get any level thorns and even thorn III by using enchantment commands in gameplay. Following are the commands

Read More: Minecraft Conduit Frame: Each And Everything You Need To Know

Following are the generated structures from where a player can find a loot chest with thorns III armour in Minecraft.

A list of generated structures from which a player can find a loot chest with thorns III enchantment book in Minecraft is below.

How the Thorns enchantment works in Minecraft:

A player can add the Thorns enchantment to any piece of Armour on his body parts such as his helmet, on chest plates, on leggings, on the boots and thrills. Minecraft players who previously don’t have armour can relate to this model of wearing armour, which details how to draft a complete set of iron armour.

Attackers who assault a participant with the thorn appeal will constantly take harm while the impact procs, regardless of what shape of fight is used. As an illustration, the proc will nonetheless have the identical impact for assaults from ruckus hits, arrows, or certainly a snowball.

The real individual who attacked the participant carrying Thorns’ entranced armor will even go through a small knockback impact.

There are 3 conditions of the thorn appeal that gamers can get below everyday situations in survival mode. Each function of the appeal will precipitously grow the danger for the avenge impact to procs.

When the impact of the enchantment appeals, gamers deal among 1/2 of a coronary heart to 2 hearts really well worth of harm to the truth who attacked them.

The most quantum of harm that a participant can cope with whilst combating with any mob attacking him, is hearts in keeping with strike. Unfortunately, gamers are not appropriate to deal anyone additional harm than this in a single proc.

A Minecraft player can wear as many pieces of thorn enchanted armor as he wishes to, but it will only ever be suitable to deal a limited amount of damage.

Still, every new piece of Thorn enchanted armour has its very own impartial hazard to proc. The way that gamers can maximise their possibilities for procs via means of getting the thorn appeal on all four of their armour pieces.

The most effective manner for gamers to get one hundred hazards to deal harm with Thorns is to apply press commands.

Which Items can be Enchanted With Thorns?:

In Minecraft, you can enchant these items with Thorns:

This article covers all about what a throne is, how to get thorns in game, its different enchantments, where to find them and their usage in gameplay. Thorn enchantment is an armor tool that protects players from attackers by damaging their defense. You can get different throne levels by different ways during the gameplay. Also, a player can enchant different items of his body parts with Thorns to make him more protected.

How many thrones levels are there in Minecraft?

Is thorn good in Minecraft?

Having throne attraction looks like a nice characteristic of gameplay. The Thorns attraction now no longer simplest does not assist you; it also hurts the participant who’s the usage of it, destroying their armor quicker and stopping them from working their harm capabilities.

Yes, a player can get thrones from the villagers in gameplay. Thorns I and II can be obtained by trading with villagers/librarians.